We were were lucky,unlike many in the state, not to be ravaged by Sandy.
Sequestered by the storm,I finally got a chance to start working on this painting today before this gourd grows a fur coat of mold!

The gourd was grow at Gustafson's, a family farm located here in Watertown. I love these crazy botanical sculptures. (My students can vouch for this)!
The gourd has a history of being one of the first plants to be domesticated. The hard shelled varieties have so many uses. They are used as vessels for storage and for a myriad of musical instruments, such as the sitar. The soft shelled varieties such as this one are grown expressly for decoration.

Still working on the first pass here.This subject is a true exercise in form modeling:)!
Posted by Blue Horse Arts at 7:14 PM No comments:

The Fearless, in the face the of Sandy, showed for this afternoon's "SketchJam" with "Live Muscians:)!

Many thanks to the artists, musicians, and all around brave of art :), who are making this a "Thang"!  And Thank You Sue for your incredible edible! (I love when people make great art you can eat!!!)


Wes  and Grant entertained us with  a rare treat of an acoustic jam, performing some of their originals and a couple of Blue grass tunes. Grant Lamphier shredded a custom made cigarbox guitar.( Love that thing!!!) The Tobacco luthier/visual artist, Rebecca Gleason was a participating sketcher at the jam!

Image Left
Graphic Designer, Claudia Duhammel working on the classical approach.( Nobody said you had to draw the  musicians)!
Thank you Claudia and Bob!

MORE LIVE ACTS NEXT MONTH at the SKETCHJAM
STAY TUNED!!!!

Posted by Blue Horse Arts at 5:07 PM No comments:

I've been playing with Witches, Vampires, and Zombies in my sketchbook lately.

It's not my usual subject matter, but then again that's what sketchbooks are for:)!

When I think of vampires I can't help but think of my friend and fellow artist,
Frank Forte.

The next thing you know I get an email from him sharing his latest cartoon animation on his you tube site Goon Cartoons!

Frank's an accomplished artist, author and animator, a former resident of Watertown, and a one-time inhabitant of our attic on the infamous 11 Roland Street. A portal of creative mayhem that temporarily manifested in the 90's.

Dwelling in the rafters of that old house, Frank cranked out pages and pages of comics early in his career. Parts of  his cult classic comic "Vampire Verses" were born there along with the locally legendary band the "Shine's" album cover.

I learned a lot from Frank of the underground genre of horror comics.Observing Frank's process from developing concepts to inking, I gained much respect for the ethic of hard work and dedication that these artists must possess in order to be successful in this field.

You can find Frank Forte's work on his website. He also has a blog where he shares his knowledge of story-boarding and concept development.You can find that HERE
It's a great resource for those interested in comics and cartoon animation.On it you'll find insight into the working processes of  cartoon comic designers.

I WISH MY BROTHER GEORGE WAS HERE

Posted by Blue Horse Arts at 2:00 PM No comments:

We've been pretty busy this month and it is looking like November will be the same! We have new classes,workshops, and free events on the schedule.

FREE EVENTS
Our Hemingway Pond Paint Outs are continuing until the end of October!Held on Saturdays, they are free and open to the public!
The coffee will be on from 12PM -5PM:)!


SKETCH JAM!
We are most delighted to announce the October version of our FREE monthly “Sketch Jam” event. It will be held on Sunday, October 28th from 3-5PM at 250 Porter Street, Watertown, Connecticut. As usual this event is free and open to the public.

This month’s musical act features Grant Lamphier and Wes Poole of the local band Pollen, performing an acoustic set. Guests will also be treated to the one of a kind musical stylings of Mr. Billy Cactus, of the Billy Cactus Band, as the opening act. Mr. Cactus (sic) will be accompanied on various instruments by Jay Foster of JFoster Music Studio.

We are really excited to host two upcoming Guest Artists this November.

Robert Zeller  of the Teaching Studios of Art,  located in in Brooklyn and Oyster Bay,will be offering a Weekend Portrait Painting  on November 10th & 11th.

New to our primarily Drawing and Painting program is a Stained Glass Workshop by Heidrun Morgan!

will learn how to cut glass, use copper foil, flux, and solder to assemble a small  star.
Right in time for the Holidays!This is a great opportunity to work with this talented artist! Spaces are Limited!!! So register early!!
NEW CLASSES FOR YOUNG ARTISTS! 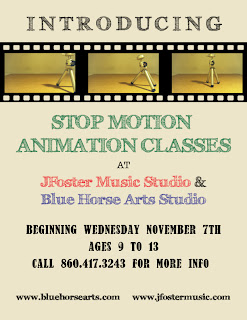 STOP MOTION ANIMATION
Jay Foster will teaching a series of  Stop Motion Animation courses beginning in November of this year. Stop Motion animation is a technique used in films such as  “A Nightmare Before Christmas”, “Corpse Bride”, and “Frankenweenie” by Tim Burton as well as “Chicken Run”, “Wallace and Gromit”, and more recently “ParaNorman.”
AND
Blue Horse Arts Studio will be offering a new program for children 10 to 13.
See our Workshop/Classes Page for More Details!

If you have any question about any of the events, please send an email to info@jfostermusic.com or info@bluehorsearts.com.
860-417-3243

We hope to see you there!
Posted by Blue Horse Arts at 2:47 PM No comments:

Hemingway Pond Paint Out This Saturday!

We would just like to remind everyone that we have made the Saturday "Hemingway Pond Paint Outs"  a continuous event until the end of October.
Artists, Photographers, and Nature Lovers are invited to come be inspired by the natural beauty right outside our studios! The studio will be open from 12PM-5PM.Bring your gear. Coffee will be on:)!

No promises but maybe you'll catch a glimpse of this guy!

Posted by Blue Horse Arts at 1:08 PM No comments:


We are so excited to be able to  bring a little of the New York Atelier experience to Litchfield County, Connecticut.
This November we will be hosting a workshop, with  guest artist Robert Zeller here at Blue Horse Arts Studio!
This is a great opportunity to infuse some new life into your approach to portrait painting  for those  with experience, or get a great jump start if you are just beginning.


Robert Zeller is the Founder of The Teaching Studios of Art located in Brooklyn and Oyster Bay Long Island.I met Rob about 6 years ago when I was doing research on drawing  methodology. I had taken a class with him at the New York Academy of Art. So I can vouch from personal experience that he is a great instructor!

My interest, at the time, was in 19th century drawing and painting pedagogy and industrial design training. The former, 19th century practice, being heavily based on observation and the later a process for inventive drawing utilizing perspective. I was researching how those distinctly different approaches could be incorporated into contemporary drawing curriculum for my students at ADM. Much of the focus of art training in the 80's and 90's was on creative expression and art theory. Though obviously important, it unfortunately left many art school graduates without a comprehensive technical understanding to execute their conceptual ideas or highly dependent on copying from a photographic reference. So if you would like to explore what you might have been missing from your previous art education or even if  you are just beginning and looking get a good solid start, I highly recommend this workshop!

SPACES ARE LIMITED  SO SIGN UP EARLY!
( See below for registration information)

"In this 2 day workshop, students will learn to execute a realistic portrait in oil paint. We will work, not by copying the model, but instead building something new and original on canvas. The great Realist painters in art history were not copyists, they were creators.
Students will first learn to block in the drawing directly on to the canvas in paint, then slowly build up the paint while establishing accurate values and color. Special attention will be paid to balancing soft and hard edges. Through the process of painting, we will talk about the under-lying structure of the skull and features of the face. We will discuss surface variation such as glazing, scumbling and building up impasto paint in the lights, while working up to a finished painting".

Tuition is 250.00 for the workshop.
Blue Horse Arts Students and Artwell members will receive a 10% discount.

To register for this course please contact us at 860-417-3243 or info@bluehorsearts.com.
A non-refundable deposit will be required to hold your place in this this workshop.Full payment must be made prior to attendance.